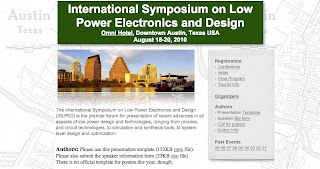 Professor Sherief Reda's research group's paper titled Post-Silicon Power Characterization Using Thermal Infrared Emissions received the best paper award at the International Symposium on Low Power Electronics and Design (ISLPED). The paper is authored by Professor Reda, and Ph.D. students A. Nowroz and R. Cochran. This year ISLPED received 203 papers for evaluation. After the double-blind review process, 46 papers were accepted for full presentation. From the 46 papers, only 5 were nominated as best paper candidates, and finally only 2 papers were selected for the best paper awards. The competition was narrowed down between papers from Brown, Cornell, and RPI. The article is available at http://scale.engin.brown.edu/pubs/islped10.pdf.  The conference web page is http://www.islped.org
Posted by Communications at 11:51 AM

Wasim Malik, PhD, a member of the BrainGate research team (led by Professors Leigh Hochberg and John Donoghue - see www.braingate2.org for details) has been awarded the Center for Integration of Medicine and Innovative Technology (CIMIT) Miles and Eleanor Shore Fellowship for 2011. This is considered a career development award to enable interdisciplinary contributions by an individual who represents the CIMIT values of academic excellence. Career development awards recognize individuals who seek careers focused on near term impact on patient care, and whose philosophy embraces innovation and multidisciplinary collaboration.

Dr. Malik will receive up to $50,000 to undertake research in the highly interdisciplinary field of neural prosthetics which encompasses neuroscience, clinical research, electrical engineering, mathematics, and statistics. He will focus on designing a new generation of brain-machine interfaces to restore function in patients with limb loss or paralysis. He intends to develop robust neural prosthetics with considerably simpler signal processing which will have a high potential for transition from the laboratory to the clinic. Dr. Malik’s mentor, Emery Brown, will supervise his training and research activities in neuromotor disability.  To learn more about Dr. Malik's background, visit his website.
Posted by Communications at 2:07 PM

A. Richard Newton Graduate Scholarship awarded to Cochran and Nowroz 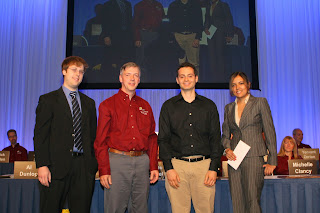 Ryan J. Cochran first came to Brown University from West Chester, PA as an undergraduate student in engineering, and graduated with Honors in the spring of 2008 in Electrical Engineering. He returned to Brown as a M.Sc. student in the fall of 2008, but has since decided to continue his studies as a Ph.D. student in Electrical Engineering at Brown. Ryan's principal research areas include thermal modeling, management, and tool development for current and future nano-scale integrated circuit technologies. Since 2009, Ryan has 4 refereed conference papers in his research area, including a best paper nomination in ISLPED 2010.

Abdullah Nazma Nowroz was born in Newcastle Upon Tyne, United Kingdom and grew up in Bangladesh. She graduated Summa Cum Laude in Electrical Engineering from Boston University in 2006. In 2007, she decided to come back to academia after working in Bangladesh for one year and completed her Masters in Electrical Engineering VLSI from University of Southern California. At present, she is working in the SCALE lab, where she works on designing many innovative techniques towards effective management of temperature, power, and performance of many-core processors. Projects include devising thermal sensor allocation techniques and signal reconstruction techniques that fully characterize the thermal status of the processor using limited number of measurements from the thermal sensors. Her research also includes techniques that provide detailed post-silicon power characterization using thermal emissions from the backside of silicon die using state-of-the-art infrared camera.
Posted by Communications at 12:24 PM 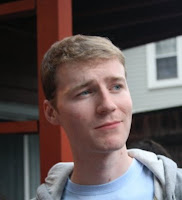 Erik Taylor (Biomedical Engineering Graduate Student) was select for the 2010-2011 Veterans Affairs Pre-doctoral Fellowship based on his research to develop anti-bacterial implants for injured soldiers. His clinical mentor is Roy Aaron, Director of the VA Center for Restorative and Regenerative Medicine, and Professor Thomas Webster is his research/academic advisor.

A profile of Erik Taylor:

Growing up roaming the Texan prairies instilled in Erik an ambition to study humanity’s ability to not only co-exist with nature, but to flourish in accordance with Earth’s natural attributes. While one would be hard-pressed to find cattle navigating the roads of a contemporary American metropolis, micro-biotic life flourishes on subways, in apartment complexes, and even in the most allegedly sterile of environments - the modern hospital. Erik's research is geared towards designing treatments for antibiotic resistant biofilms on medical devices. He uses nanotechnology to create novel interfaces promoting the natural elimination of biofilm.

Erik received his Bachelor of Science from the Department of Biomedical Engineering at the University of Texas at Austin. His senior design project was “An arthroscopic tool for the delivery of a thermo-sensitive hydrogel into damaged knee cartilage.” Erik’s research excellence wrought him an Office of the Vice President Undergraduate Research Fellowship for his work with Reese Endowed Professor Miguel Jose Yacaman in the Department of Chemical Engineering.

Erik is currently a graduate student working towards his Ph.D. in Biomedical Engineering at Brown University. He is advised by the Graduate Director of the Center for Biomedical Engineering, Associate Professor Thomas J. Webster. Through Prof. Webster’s guidance and expertise, Erik is working on his thesis entitled “Superparamagnetic Iron Oxide Nanoparticles (SPION) for the Treatment of Implant Infection.” The Society for Biomaterials recently bestowed upon Erik the Student Travel Achievement Recognition (STAR) graduate student award one of its most prestigious graduate student honors for his exemplary work in nanotechnology. He was also a National Science Foundation Graduate K-12 teaching fellow for two years (the maximum duration allowed for the fellowship program) where he taught science to grades 3-6 at Martin Luther King Jr. Elementary School in Providence, Rhode Island.
Posted by Communications at 6:48 PM 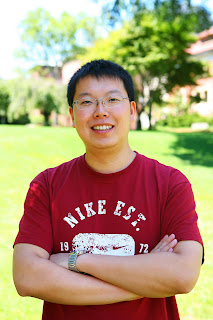 Here is a short interview with Lei Yang:

How does participating in conferences such as Sigma Xi impact your Brown Engineering experience?
(Lei) Sigma Xi is one of the oldest and most famed scientific societies, attending this conference is not only a honor but also a great opportunity to meet the top students and researchers in the New England region. It's also a good opportunity to showcase the cutting-edge research led by Brown Engineering faculty and students.

What is the impact of your research?
(Lei) It was the best poster presentation during a conference that I have ever attended so far, because I obtained so many new ideas and comments related to my project. The conference was very well organized, and each participant had many chances to talk to most of the professors and students. I received a lot useful comments on the methodology and techniques I used for my study, and surprisingly, many of them were from the people outside of my research field. So I think I also benefited from the multi-disciplinary atmosphere of the conference.

What degree are you seeking and when will you graduate? What do you hope to do with your degree?
(Lei) I am seeking PhD in Engineering and will graduate in May 2011. I want to become faculty in Materials Science after my PhD.
Posted by Communications at 6:38 PM